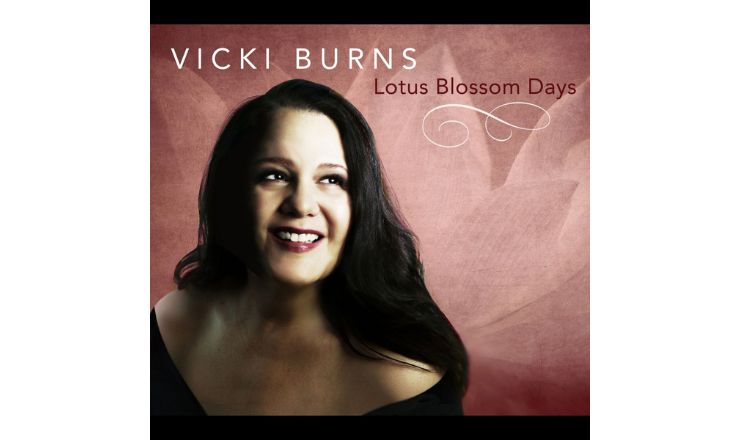 Listening to this highly accomplished album, Burns’s third recording under her own name, it made me wonder why I had not come across the vocalist before. A regular performer in and around New York for the last decade, the vocalist’s career stretches further back than that with spells living and working in Boston and San Jose, California.

Establishing a firm reputation wherever she has chosen to work, Burns’s released her first album Siren Song in 2003 with a live recording, Live At Anna’a Jazz Island five years later. It is therefore somewhat of a mystery that she has waited more than a decade to record again.

Now that she has, Lotus Blossom Days has captured Burns at her peak. As good as the earlier albums are, this is the real deal.

Vicki Burns sings with a full and vibrant delivery, and an impressive three octave range. However, the most impressive aspect of her singing is what she has gained from years of experience, and how she is now fully aware of what she can do and how best to express it.

Her repertoire is predominantly comprised of jazz standards and the Great American Songbook, but what is not predictable is Burns treatment of her chosen songs. Each of the twelve tracks that make up the album is carefully arranged, yet skilfully done so that there is plenty of room for the soloists and spontaneity in the studio.

‘If You Never Fall In Love With Me/Del Sasser’ is a brave opening number and a real statement of intent, with its bold intervallic leaps and intricate theme. Sam Bevan’s arrangement for the horns is also particularly appealing and effective, as has ‘Out Of This World’ featuring some wonderful tenor from Dayna Stephens.

As the album title would suggest, Billy Strayhorn is a prominent part of proceedings and Bevan pulls out another fine arrangement for a lovely ‘Lotus Blossom Days’, and this is matched, or perhaps even bettered, by a superlative reading of ‘Bittersweet’.

Performed as a duet for piano and vocals Burns is totally in control of the music, lyrics and her incredible voice in a passionate and emotional performance that leaves you hanging on her every word. Not to be outdone, pianist Art Hirahara is with her every step of the way.

Another nod to the singer’s love of modern jazz can be heard on two quite startling tracks in ‘A Long Way To Go/Equinox’ with her wordless vocalising in the opening bars leading into the laconic bass line and lyrics by Chris Caswell.

Hirahara gets in an excellent solo, and with the track featuring only vocals and the rhythm section is a nice change of pace. This is maintained with a tremendous ‘It’s Over Now/Well You Needn’t’ with Burn’s handling Monk’s tricky melody with aplomb and topping things off with a wonderful scat chorus.

It would be a grave omission not to mention in closing a couple of original compositions that round out this wonderful album.

From her debut album is a reprise of the title track, ‘Siren Song’ written by Burns that has one of those alluring tempos that draws the listener into the song, and that showcases again Burn’s handling of a ballad. Bassist and arranger Sam Bevan also takes a deeply resonant and expressive solo.

The other original of note is by Tessa Souter, ‘You Don’t Have To Believe’. Again, Bevan uses the horns nicely to set the mood of the composition, and trumpeter John Deutsch bring a suitably melancholy touch.

This is Vicki Burns the storyteller as the mystery of Souter’s lyrics unfurl through Deutsch’s continuing contribution working sympathetically with Burn’s impassioned cries and soaring vocal lines.

This is a quality album that may not readily appear on your radar, but to miss it would be a shame.