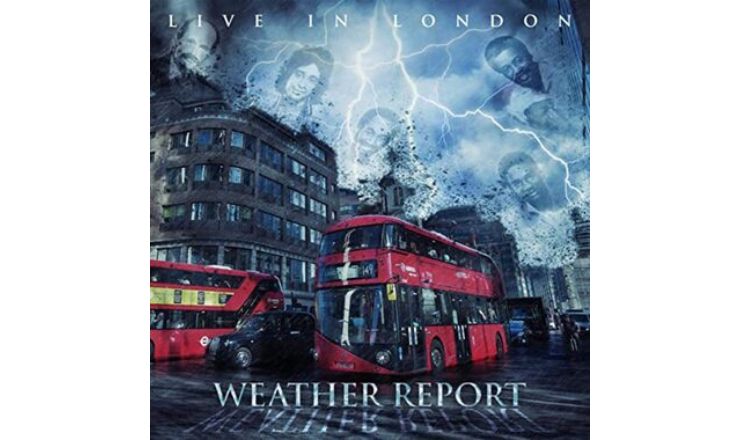 Alongside the Miles Davis bands of the “Silent Way” and “Bitches Brew” era, Weather Report were the kings of the highly popular fusion genre of jazz for many years, with only Chick Corea’s “Return To Forever” running them close. Led by the Austrian keyboard wizard Joseph Zawinul and boasting Wayne Shorter, one of the greatest saxophonists and composers of modern times, alongside the incomparable bass master Jaco Pastorius, they were well placed to rival Miles, and so they did. With the iconic albums “Black Market” and “Heavy Weather” in the mid seventies they were filling stadiums and festival fields across the globe on a regular basis. The bands career ran from 1971 to 1986 during which time they recorded eighteen official albums and three singles, were the subject of many “bootleg” recordings and topped the Downbeat jazz album charts for five consecutive years.

The “Live In London” session recorded on this album is something of a mystery. Firstly “Angel Air Records”, a label born in 1997 and recently purchased by “The Store For Music” company, is not one that many associate with jazz at all. Secondly the venue or date for the performance remains unknown to most, or has not been revealed for some reason or other. We are told it was in the eighties and as bass man Victor Bailey was with the group only from 1982 to 1986 that narrows it down. My guess of venue is “The Hammersmith Odeon” as it was then, but that’s only speculation. No doubt all truths will be revealed when people purchase the CD and are able to claim “I was there”. As for the recording itself, the music is highly charged throughout in front of an enthusiastic crowd. There are no show stoppers like Zawinal’s Birdland or Shorter’s A Remark You Made, but enough excitement and stunning virtuoso playing to keep things moving along for the best part of an hour. The opener Corner Pocket sets the scene, don’t confuse this one with the tune of the same name written by Freddie Green for the Basie band, it’s a piece by the leader that also appears on the Sportin’ Life album of similar vintage. This one opens with the percussion instruments drawing the listener in and preparing themselves for a tour de force from Wayne Shorter, lots of tension created by the constant tempo changes and almost hypnotic meanderings from the leader’s keys, it’s a magnificent piece. The major cut of the album follows, there’s almost fifteen minutes of music here, but no title, it is in fact labelled Unknown on the album sleeve. It’s mostly at the slowest of tempo’s with Joe painting an ever changing background to showcase Wayne on absolute top form, fully reminiscent of his days with Miles, alongside the ever changing conversations between Omar Hakim, Mino Cinelu and Victor Bailey’s electric bass. You could say that the listening experience somewhat falls away as the disc continues, but that would only be relative as the standard of the first twenty five minutes is at such a staggering height. Fast City has always been a crowd pleaser for the band, on this version bass man Bailey plays out of his skin, bringing memories of the great Jaco to mind. However, the overall soundscape becomes very crowded, dominated by Rossy and Hakim with keyboards and soprano wailing away with no let up. Clearly many enjoyed it, the visual aspect would have helped, but in truth it is the only low point of the album. Where The Moon Goes is a lengthy and intriguing Joe Zawinul composition and here it is split into two parts that are separated by an eleven minute Drum Solo, given its own track listing on the sleeve note. The piece is full of nuances, contrasts and group chanting, upbeat most of the way, with Wayne superb on soprano once again. It brought the recorded part of the gig to a rather unusual close. The album is a very worthwhile catalogue addition for Weather Report fans, particularly for the two opening tracks, and will of course be vital for all completists of the band’s music.