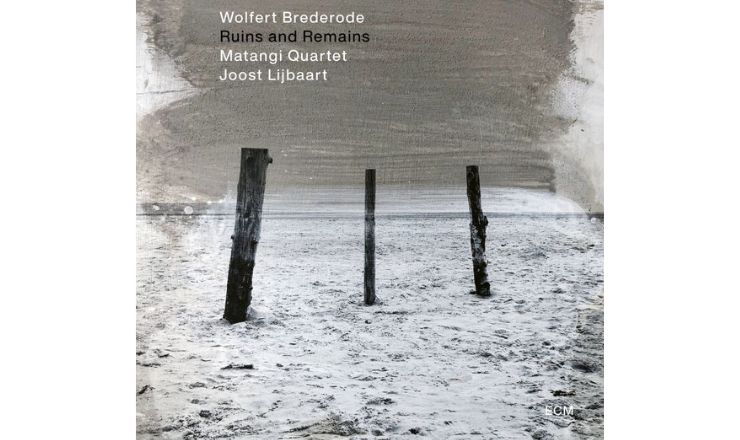 A sense of lyricism that seemingly teases the melody from whichever context he is working in, often sparse yet always beautiful.

Originally written as commission to mark the centenary of the First World War, Ruins and Remains received its debut performance in November 2018.

Conceived and written as a piece for piano, string quartet and percussion the music, through numerous concert performances, taken on a life and personality of its own that is far removed from the composer/pianist’s initial concept.

From being a piece to commemorate a dark period in European history, the music now takes on a broader outlook encompassing not just grief and loss but the indefatigable spirit of people across the globe, and an air of optimism and light permeates throughout.

Ruins and Remains is therefore very much an ‘evolving suite’. The beauty lies within the blending of the instruments along with their role within the music that rather than being predetermined is allowed the freedom to be in the moment.

The demarcation between improvised and scored parts is in a constant state of flux, that become meaningless as the sonic pallete seemingly driven by the string quartet creates a soundscape for Brederode and Lijbaart to work their sounds and textures within.

The music exhibits a quiet beauty as the musicians traverse between written passages and improvised textures that are subject to change within any given moment.

‘Ruins and Remains’ has a desolate feel.

The strings are dark and sparse and the percussion adds to the feeling of desolation and despondency, yet the ensemble can evoke an entirely different mood in a heart beat with ‘Ruins II’ that begins with Maria-Paula Mojoor stating the beautiful opening melody on violin.

This is then picked up by Brederode and the string quartet as the piece unfolds to reveal a more optimistic feeling than had been heard previously, to be followed by the delicious and tantalising ‘Duhra’ again with Majoor’s violin featured prominently.

The music is not always quiet and introspective, as the opening compositions serve to introduce the overall breadth of the music with the ethereal opening to ‘Ruins I’ with bowed cymbal and gently plucked strings leading to the patient melody of ‘Swallow’ that becomes more assertive and expansive as the composition develops.

This is brought to the fore again with ‘Cloudless’ where the string quartet and drums drive the piece, full of subtle nuances that dictate the flow of the music.

Brederode’s  scoring for the strings is inspired. ‘Retrouvailles’ is one of four miniatures of two minute or less in duration, and is for the string quartet only, and the listener can luxuriate in the way they blend their sounds with a subtle use of dynamics that permeates throughout their playing on the album.

If then the Mantangi Quartet are so intune with the pianist’s methods, the musicians on this project have been friends since they were all studying at The Hague’s Royal Conservatory, it will come as no great surprise that improvisation has always been a part of their collaborative work.

What is a surprise, however, is just intuitively they are able to create music together in a totally spontaneous manner.

Both ‘Nothing For Granted’ and ‘Dissolve’ are improvised pieces that sound as if they were as carefully preconceived and scored as the other parts that make up this remarkable suite.

Those familiar with Brederode’s previous albums for ECM, the two quartet releases, Post Scriptum (2011) and Currents (2007); and the more recent trio set, Black Ice (2016) will hear the patient and logical development in Bredereode’s music.

Never one to rush, his piano sound has evolved along with his sense of lyricism that seemingly teases the melody from whichever context he is working in, often sparse yet always beautiful.

In this respect Ruins and Remains both follows and develops his progress along his chosen path and does not disappoint.