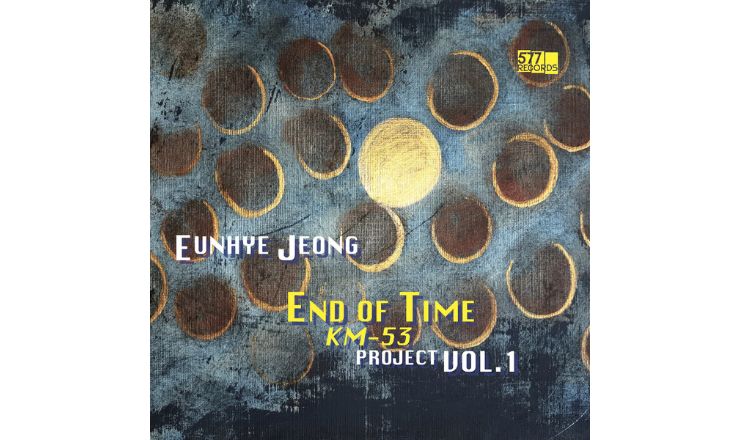 End of Time/Km-53 Project Vol.1 is an exploration of the idea that distant absence from home helps to develop self-knowledge.

The quintet together studies this notion, apparently in the spiritual company of a particular moon bear that Jeong has been particularly fascinated with.

This Asian Black Bear, named Km-53, from the Taebaek Mountain range has developed a penchant for running leagues between mountains in various provinces of Korea.

The quintet is led by South Korean arranger, composer, improviser, pianist and writer, Eunhye Jeong, who has nurtured the notion discussed and presents her contention, musically, with an unworldly and unswerving sophistication that encompasses uncannily sparse stimulations alongside of intricate, animated configurations.

Jeong has composed and directed the three pieces, but she is anything but alone.

Saxophonist Allison Burik is also a clarinettist, composer, and improvisor.

In her music, she bends and twists genres and abstracts inspirations from bass clarinet compositions in jazz, adding solo saxophone originals and free improvisation.

Cellist Mina Kim has been active, musically, in the Boston area since 2010 and has been flagged by the Boston Globe as ‘eloquent’.

She plays with orchestras small and large and would wish to become a mentor for emerging cellists, to help them find their own musical voices.

Musician, composer and educator Maxwell Ridley began his formal studies in high school at the Boston Arts Academy and it was there that he first took to improvised music and the upright bass.

He studied at Berklee College of Music for both undergraduate and graduate degrees and down the street from Berklee at Boston’s historic Wally’s Jazz Cafe.

Cuban drummer Francisco Mela studied at the Music School of Arts El Yarey as a teenager then progressed to the National School of Arts for Teachers, El CENCEA.

He moved to Boston to study at Berklee College of Music and was invited to join the percussion faculty.

He became the house drummer at Wally’s Jazz Café mentioned above and in 2005, Mela joined the quartet of saxophonist Joe Lovano.

His music never smothers his fellow musicians, and he continues expressive throughout, laying down a friendly and open palette which offers no constrictions.

The whole is a very fine progressive work, its achievement the result of bringing together such diversity of diligence, learning and experience. Superb!